SHIELDS of Early 15century and their combat sistem

Everything about shields.They are your best friend in combat and your recognizable ‘‘identity card’’ of the middle ages.How do you imagine defending and fighting tactics in first person?Styles,infantry-cavalry-tournament types,sizes,historical coat od arms.Role of the shields in the 15 century facing the new danger - firearms !..etc…Fight with buckler or reload your crossbow in cover, behind heavy pavise…How everything should it look like ?..

The shields you depicted are called pavise and judging by the shape and size used to protect a (cross)bowman when he’s reloading. The pavise was usually held by a second man (the pavisor).
I would like to see archer’s buckler, tournament (jousting) shield, “heater” shield and Hungarian wing-shaped shield.

Good post since news of shields in combat have been added. One thing to note a shield often had a family crest, “identity card” as @ VOKI mentioned. I highly anticipate how the shield’s mechanics and looks will be during combat. Now in question of the shield how will it interact with damages and blows and arrow? is another question ask for I lack of knowledge on medieval era I’m sure some people can answer how would this possibly be affected in the game.

The mechanics should be such that the shield can be hacked to pieces, and used as an aggresive weapon to slam into an opponent.

The reason why the usage of shields quickly declined between the late 14th century and the early 15th century wasn’t the emergence of firearms but the emergence of full suits of plate armor. Why using a shield made of wood and some metal if your body armor is already way better than that and made of better materials? Soldiers then began to use both hands for using their weapons with more flexibility and power instead of being forced to use one hand for the shield, especially when fighting on the ground.

Why using a shield made of wood and some metal if your body armor is already way better than that and made of better materials?

To deflect blows from axes, hammers and the like?
Not to mention showing the before-mentioned family or battle crest (heraldry).

To deflect blows from axes, hammers and the like?
Not to mention showing the before-mentioned family or battle crest (heraldry).

Yes and no. Shields were used on horseback for a bit longer but not very often on the ground. The crest way usually also shown on the sobrecot and the horse armor/throw. And often they had their shield fixed to the saddle but didn’t acutally use it in battle.

But of course it depends on the armor you wear. Without using a full suit of plate armor a shield can be quite handy.

Of course that shield in 15 century is losing the battle vs full plate armour,but that armour also need to be defended from pleanty of deadly armour pearcing weapons specialized for that like Crossbow bolts for example or maces,poleaxes warhammers.Shield is still in the arms of well armoured knight,and to mention lower ranked soldiers like sarjeants,common swordsman,militia etc…

It would be great if devolopers make some good animations, or that feeling when whole your body and whole your arm is shaking under the blows of axes,tiring you out losing your stamina.Billhooks trying to hook shield to take away from your arms,crash of heavy stones durind sieges on you,and deadly points of arrows stucking in shield couple of centimeters from your face while you are hiding behind it…All of that should be as much realistic as possible giving the sense of REAL importance of your shield during first person combat

The shields you depicted are called pavise and judging by the shape and size used to protect a (cross)bowman when he’s reloading. The pavise was usually held by a second man (the pavisor).

I’d judge them as hand pavises

and historical depiction to prove it’s not a modern invention.

That said I believe men-at-arms still used heater type shields while these in a larger format were used by crossbowmen.

On the other hand a lot of modern day hussite art does show them using these hand pavises. I am not sure whether that was the actual case.

Seems someone else has done that work for me 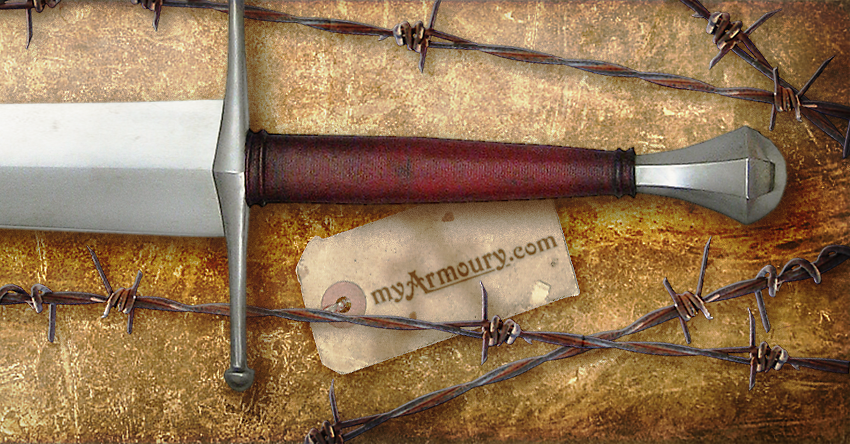 A resource for historic arms and armor collectors with photo galleries, reviews, reference materials, discussion forums, a bookstore and a comparison tool.

The following wall painting shows an archetypal array of infantry soldiers in Italy in the 14th century with shield bearers protecting the reloading crossbowmen. The used pavese is of mid size, probably similar to ancient Roman shields.

Photograph of a wall painting in the castle of Sabionara, Avio, Italy, mid 14th century (took from European Medieval Tactics 2 - 1260-1500, by David Nicolle)

The following painting shows a battle in France in mid 14th century. You can see that different types of shields were used, bigger and smaller ones.

And the third painting shows a Bohemian soldier from the late 14th century wearing a round shield with a peak in the middle.

Guard at the resurrection on a painted panel, Bohemia, about 1380 (Trebon Altar, Narodni Galery, Prague)

Similar small round shields (or “bucklers”) are shown in the following painting from the late 14th century in a French manuscript.

And the last one, showing soldiers with bigger round shields which cover the whole torso. You might notice that only very few soldiers actually use a shield while most use both hands for their spear/polearm, trusting their armor to protect them.

The battle of Roosebeke in an early 15th century manuscript (in Chronicles of Froissarts, Bibliotheque Municipale, Besancon)

Hi there,
i just take some pictures of a small “hand-pavese”. We made some for a museum, but I kept one for myself.

Before someone says, This is just modern and does not count": It is made of the very same materials (no plywood) and even with old tools. Material: Wood, rawhide, bone-glue, linen cloth, nails and some chalk. I put my crossbow on one picture to show the scale. Every of that materials alone would not withstand a single blow, but in combination it is very sturdy and lightweight. Little bit like those modern fiberglass-materials

I’d judge them as hand pavises