Will there be scabbards?

In a lot of the videos I have seen recently, everybody’s swords are hanging on their sides by nothing, will scabbards be in the game? one of the best parts of games set in this time is the immersion but at least in my opinion one of the most immersion breaking things I can see in games are swords just floating on people hips and the bare blades, nobody would keep their swords like that as it would get dulled, accidentally cut your horse/yourself if your not wearing leg protection, and it would damage the blade itself via the elements. are we going to see scabbards in the game? I know you guys are doing ana amazing job with the layered armor system and how lower layers are not clipping through the upper layers, and the reason a lot of games don’t have scabbards is because of clipping I really hope you guys bring them in

Everything that I’ve heard recently suggests that yes scabbards will be implemented in the final game.

Note sure why we haven’t seen them yet, but WH has come out and explicitly stated they will be present… 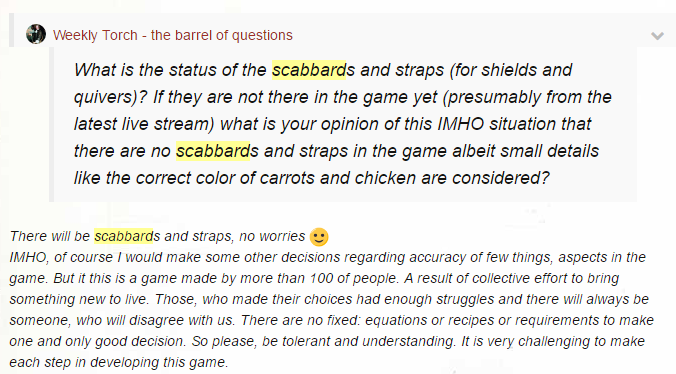 Yes, we see an example/proof in update #16

I wouldn’t be 100% sure. It is true that they confirmed it some time ago, but recently they answer any question about scabbards ambiguously. For example in the Weekly Torch in August Michal Hoz answered just “I have no control over that” when asked whether there will be scabbards. And I believe I have seen even other people from WH avoiding the question. If they were sure scabbards will be in the final game, they wouldn’t act like that, especialy since they confirmed it before.

They showed my above screenshot in the same video they said all features and most assets have been added, I don’t see why they’d have cut them out.

Honestly, that doesn’t really mean anything. I’m pretty sure creating a model of scabbard has never been the issue, it is the mechanic of sheathing that might be hard to pull off, due to animations, clipping, different type of weapons etc. They worked more than a year on horse AI only to realize they can’t get it work and so they scraped it all. This could also happen with scabbards.

@Freix I think many of us would rather they have scabbards than not regardless of any technical limitations or issues they might be facing. In saying that though, hopefully they get them functional