Hello, I’m sorry my first post has to be here, in the bugs section but I find this one (apart from many others, sadly) very immersion breaking, and what’s even worse - a manifestation of someone’s both indolence and disrespect to the others’ magnificent job, and, in my opinion, very last thing that makes this game somewhat interesting - the sound design and voice over.

Outside of Rattay, on PS4 there’s an audio crackling, stuttering bug, which is obviously a bad programming issue that disregards a very well done voice acting (sometimes barely heard dialogue) and also the work done in the music since it’s breaking too.

My titual conclusion comes from frustrations I’ve had with this game, which seems to disguise itself as an old school rpg (not) but delivers a mediocre gameplay experience caused by badly designed mechanics (not to be mistaken with outdated). Broken lockpicking on ps4 since release? How long has it been? 3 years? Do your staff actually know how to code or you just implemented some ideas into Cry Engine and went for a beer? Simple things like walking and jumping seem broken, not to mention combat, which I have seen had been covered by lots of reasonable people.

Oh yeah, and the people - congratulations on gathering some of the most toxic gamers. There’s “wow, you’re just a ret**rd”, 12 years old vibe in here I see quite often and I cannot imagine how this is a good thing in a medium such as video games. It may help in adolescence but this is not, and shouldn’t be, my problem.

I’m sorry for harsh words but long have I been insulted so much with the medium I care less and less over the years since I started my journey with PC 80286 and Commander Keen or whatnot.

And I thought Skyrim was broken.

Give my regards to the actors, it’s been really refreshing to hear a good voice acting in a game that wants to be an RPG, nearly as much as Henry wants to avenge his parents. I would compare the dialogues with some of the old Lucas Arts adventure games, quality-wise but then again they’re ruined here by a bunch of bad (lazy? Who am I to judge) coders who thought it’s going to be a good idea to release a game along with a few DLCs, littered with bugs, poor design decisions, and a hope that some new kids will have right to mock the oldf*gs on how they’re incapable of playing “A REAL GAME”. This is far ignorant and I couldn’t care less.

To conclude, I would not and will not recommend this game to anyone. Sorry but it’s just insulting and painful to play. Not about difficulty. It’s simply a badly programmed game. 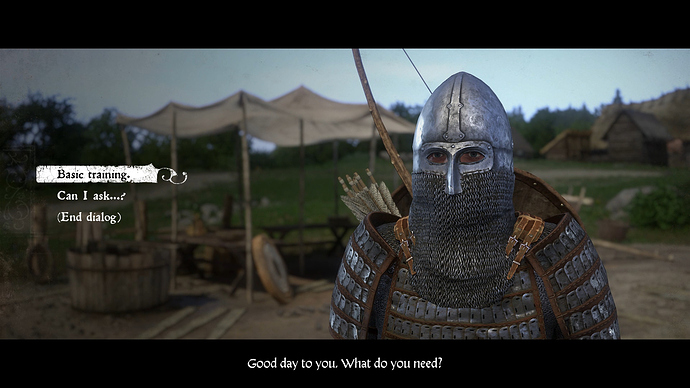 I was in the same boat at the beginning several hundred hours of playtime ago. They make poor decisions in the name of hardcore/immersive gameplay that just leads to tedium and grind, but the game opens up into something much closer to a classic RPG or tabletop than your typical skywind. Not fallout 1/2, Sadly closer to a medieval FO3 than a FO:NV due to only one perspective progressing the linear main story.

The games “feel” problems stem from trying to make a better medieval swordfighting sim. They should have learned from the rotting corpse of War of the Roses than adding anything to the tried and true directional combat system M&B brought to dominance is a bad plan. All problems with combat are caused by tethering, stat based control unresponsiveness, and the quicktime perfect block-masterstrike bullshit. Combos don’t work on any enemy that can throw a perfect block or masterstrike on it’s very liberal RNG window. Only ways to play are immersively killing everyone with arrows and/or becoming 20 statman using strength and the clench stunlock to actual win fights consistently. Still, like a battered wife you grow to live with it and how to plan around it’s ire.

The game on the 2nd+ playthrough does expose it is very, very linear outside of the fact it technically is a sandbox. Part of this is limitations of game scope due to actual historic events, part of it is due to budget limitations from the games kickstarter origins. Also some uneven quest design. Some things have many solutions and branching objectives, others are 100% on rails. Some of the good stuff is frontloaded, other parts are buried behind walls of main quest progression and voodoo triggers requiring you to chat up tavernkeepers to make the game world happen. You have to go out of your way to be a bad guy and general theft quickly becomes a game just to see the groschen counter go up once you’ve trivialized every fine and quest with a bribe option by looting dozens of sets of plate from skalitz bandit spawns. Spoiler, sigismund becomes king of bohemia IRL so it’s hard to see where the game is going for pt3 besides some more grimdark politicing as your serial killer henry shouts platitudes about honor and “He was people!”.

Get above lv 10 and the game becomes your playground, before that everything sucks and hates you. It’s both maddening and captivating. It’s more good than bad. The game is excellent in parts, rudementary in others. I really wish they’d spent a lot more effort on radiant repeatable content. The fact the roads never get safer but Robard/Bernard/The custodian you aren’t allowed to murder say you’ve taken care of all bandits in the region, theft has no true consequences and you stay a golden boy unless you literally murder people in the street, and quest design only allows choice in short bursts. Quests like game of throws seem unifinished and hollow because the lords don’t matter, killing everyone doesn’t matter, failing doesn’t matter, and the names and politic’ing has no effect on the region.

My biggest gripe is there is a very clear branch point where you could be “evil” henry.

Thank you, kind sir for your long and exhaustive reply. I’m fine with struggles, I have overcome them in many other, even less forgiving games. The main thing that irritated me to the point of writing this post was the forementioned audio bug, which ruined the one thing that, at this stage of the game (main level around 8/9, herbalism 20 tho - yes, I can be quite autistic) I’d found really, really good - sound design.