I couldn’t really find the proper category within the forums for this type of ask. So… I’ll try to keep this simple. Middle Ages armors were mostly utilitarian, but there are many, many examples of armor that was highly stylized and nice to look at. There are actually some examples of these in the concept art for the game.

I’d like to see the option for big, bunched up, free-flowing cloaks over our armor that have directional movement and wind physics, making for a fantastical stylization of the character (if Skyrim modders can do it, so can this development studio)

This isn’t something outside the realm of possibility, and I don’t think that it’s too difficult an ask.

Linked below are some examples of what I’d love to see, and I think that most would agree that it would add some much needed flavor and personalization to the game. If Warhorse doesn’t add this to the game, I’m sure once/if the modding community actually picks up, it might become a possibility. I can see this game becoming huge with the Nexus Mods community, but not if they don’t quickly get the modding tools out there for the community to use, because modding for the game has all but died off everywhere I’ve looked.

I suppose it’s just too difficult to extract and then search the multitudes of archived databases/tables/scripts, copy the ones needed, modify them and create a PAK to replace it within the mods or data directories. A one-stop-shop suite of tools for exploring and modifying the archives, replacing files, lines within files, meshes, textures, sounds, effects, scripted instances, etc. would go a long way toward being able to work with adding some personalization to the game.

I’ve done a bit of this myself, picking through and fixing various outdated mods for KCD, and I’ve also done a fair bit of armor creation for Skyrim SE and Fallout 4, but KCD is a whole other monster, and the tools I’m familiar with, like NifSkope and GIMP, well, I’m not positive they would even be practical for use with this game. I guess I should give it a try.

But more to the point, here are some examples of “cloaks” that I’d like to see in the game:

All of this being said, I just want to say that this game is pure genius, and hands down one of the best games I’ve played before and since Witcher 3 Wild Hunt, and certainly gives it a run for its money. I’d like to see some expansion of the map, maybe travel to Cumania, or Austria or even Aragon. Somewhere within or without the 15th century Empire.

At any rate, I hope someone from Warhorse might see this and pass it along. I know cloaks make for a nightmare with clipping, but it can be done. If people can do it from their bedrooms on their personal PC working with an antiquated engine the likes of what Skyrim SE is running on, then it most certainly can be done for KCD, and in a very fine way at that.

So much for keeping this simple. But, thanks for the consideration.

Some additional things I’d like to see are some survival elements, like building a campfire, campsite, carrying a bedroll, flint, etc. This would go a long way toward bringing about a depth of gameplay that would certainly be beneficial to the game.

When it’s getting dark and I’m out and about away from a town or city, I’d like the ability to hop off my horse, throw out my bedroll, gather some wood and build a fire for the night, so I can get right back to it the next morning. This is a much needed addition to the game.

I absolutely agree with you about those survival elements. About new armor… I would be happy if ppl would stay in the period. For example the great helm on last Picture were used only on tournaments in this period and only by nobility (other Picture should be ok I think- Iam not professional).
If they would add something I would be happy for crossbows (they were used much more than bows here in Bohemia) or Lances for riders. And one more thing… I would like to see wagons on roads.

About cloaks…I am affraid that shileds on back with cloaks would mean terrible clipping.

U have to wait next game

I am sure something will be handled by mods.

they should just make the mail aventails and coifs drape over and above plate armor rather than below it. it’s actually already part of the game’s procedural layering system, but it’s currently flagged as having lower priorty than plate and other items. if you selec mail coids you can briefly see it draping over the chest and shoulders of plate armor, until the game adjusts it to fit under.

i understand there must be some technical faults with it, but from what i can see it’s actually not that bad. the clipping is rather minimal. 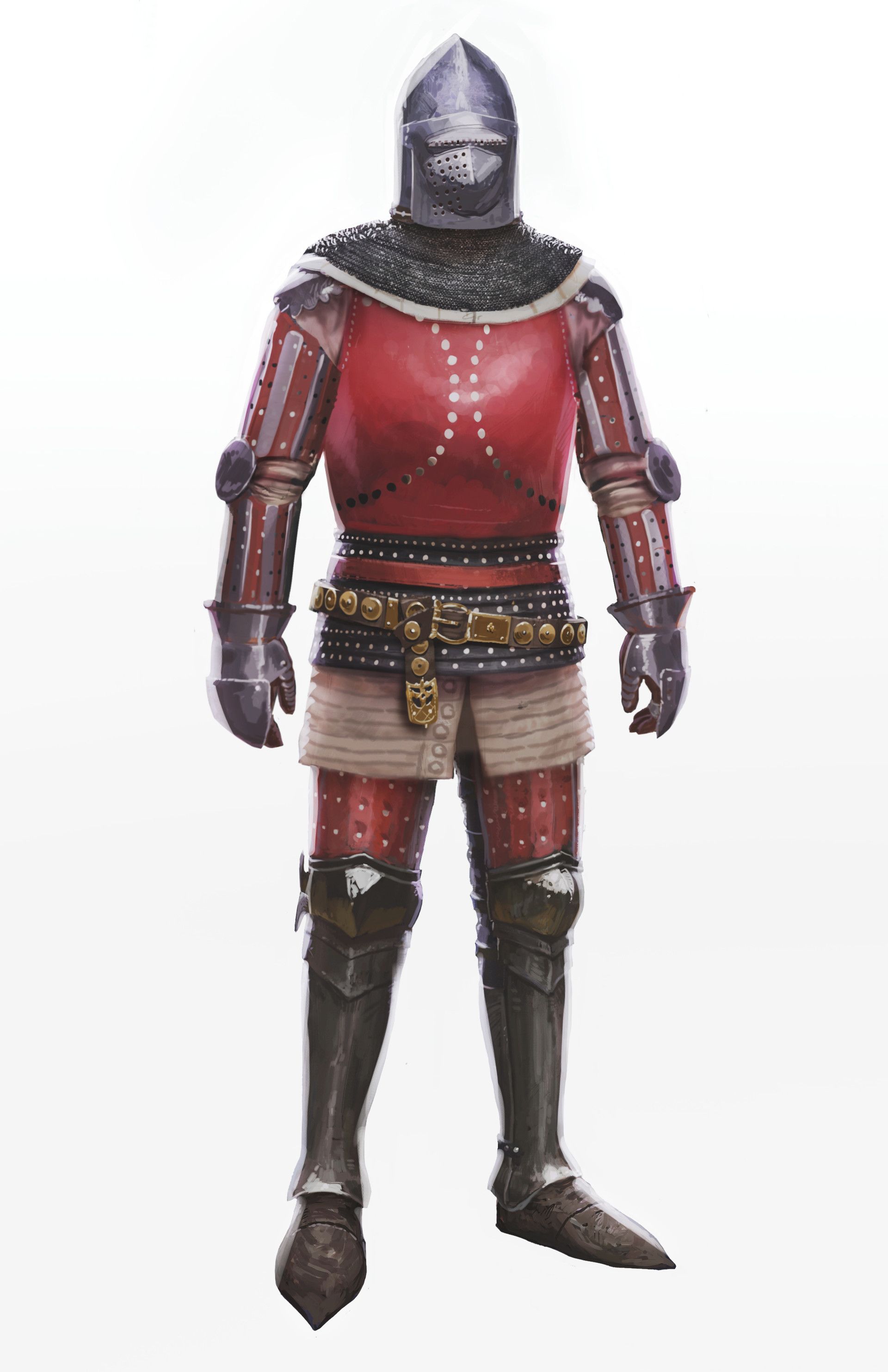 KyG… smh. It’s simply an example. Don’t get too caught up in the details. If you get my point, then it served its purpose.

korbel05, clipping can be dealt with. I modded Skyrim for years, and there are so many elements to mixing and matching clothing and armor, and so many armors and clothing to mix and match, using Bodyslide, GIMP and NifSkope to perfect it and make it all work. I’ve had cloaks with full on wind and movement physics with sword and shield, and little to no issue with clipping. No more than is already present in KC:D. It. Is. Not. Difficult. to do if done properly, and for the most part, the very same parameters can be used across the board for all cloaks and shields to keep them from clipping, so it’s not like it’s some massive endeavor.

The cloak would simply be pushed against the character body or armor while a shield is equipped, and the shield would hide any “crimes” of the cloak clipping against armor underneath the shield itself. The shield and armors would have spacial priority to an extent, with the cloak being press between them. If it can be done with a nearly decade old game, using only modding, then it could be done by Warhorse with a little work.

It would go a long way toward making characters look and feel more interesting, and frankly, more realistic.

People in the middle ages wore button shoulder cloaks, and closed front mantles. Many types of fighters and ex soldiers worked as guards for taverns and traveling merchants, and wore cloaks to hide their metal. People also wore tunics and surcoats. But the fact is, most people wore cloaks because they were useful in many ways. The less fortunate wore woolen cloaks, the more fortunate, such as knights like Henry, often wore fur-lined or silken cloaks and tunics, often two tunics, one as an undershirt and one over ones armor, under the cloak or mantle.

I’m just saying, this game deserves to spice up the clothing a bit and clipping is no excuse not to.

Let me show you all something. Some of these screenshots are likely NSFW, but many of them showcase how I was able to layer multiple different armors and clothing that weren’t meant to be worn together and make them, for the most part, not clip. You’ll notice that in many of the poses and animations that the fabric portions of the clothing stretch and move with the hardened armor portions without clipping through them much, if at all. Much of this was a work in progress, and I actually spent very little time with it all, but if I could do it with modding an old ass game, then Warhorse most certainly can with a bit of effort.

And if not, then when they finally get their modding tools released, I suppose I’ll just do it myself if I’m still interested by then. ;\

Skyrim armor and clothing, and not so much clothing: https://drive.google.com/open?id=1IfrADQWWwDpDooWiasqg7-r-6sDxJNAU

Here, notice how it moves with the positioning of my character? https://drive.google.com/open?id=1NVrVEZ4pBjLWFGcx9_CZWUqDdD0KGEWu

Here, even with this insane pose, stretching it beyond what it was meant to be stretched, it still doesn’t clip through the armor: https://drive.google.com/open?id=11y2VYiE5Y4FVS9QQXeRSRB9uWiOKOKDo

This is called “weighting” the body’s bones and clothing. It gives more or less weight to certain aspects of the character and clothing. Something with less weight will be manipulated more by something with more weight. So, the legs force the lower weighted fabric into stretching around them, and the armor has less weight than the legs, but more weight than the fabric, so the fabric stretches around the armor as well. This is simple stuff here, and can easily be done with weapons and shields and fabrics as well in a game like KCD. It’s really not difficult.