Shortly after launching upgraded game the “Rattay Tourney” activity will start on its on. It will appear in the quest log, with the objective saying the tourney takes place tomorrow. This quest starts on its on, without any interactions to related quest givers like: Herald, Hans Capon or Blacksmith of Samopesh (or any other NPC). From now on it will be notifying you once in every in-game week (or so) about the new tourney, as usual.

1 - “Rattay Tourney” started on its own… 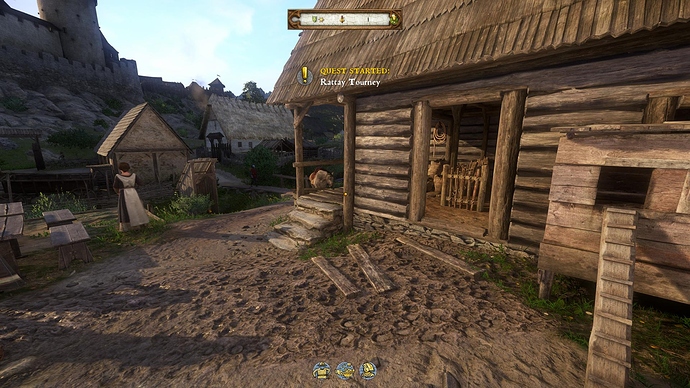 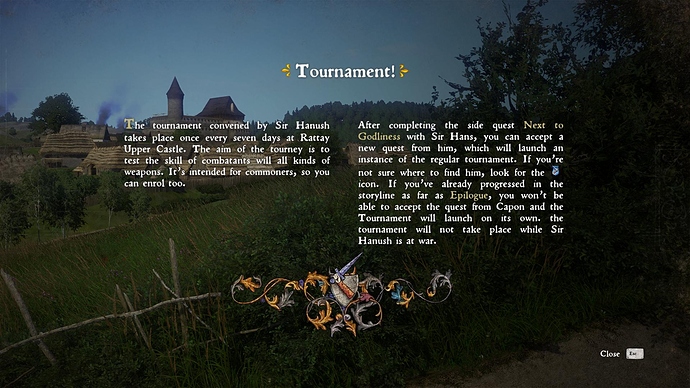 Also if you did not turn up to the tourney you will get an “objective failed” as well as “quest failed” notifications. They are a bit misleading, in my opinion. Especially for a KCD newcomer, for example, who does not know “Rattay Tourney” is a regular activity, it definitely would feels like he failed some essential quest. Even more, if player is god knows where at what moment. 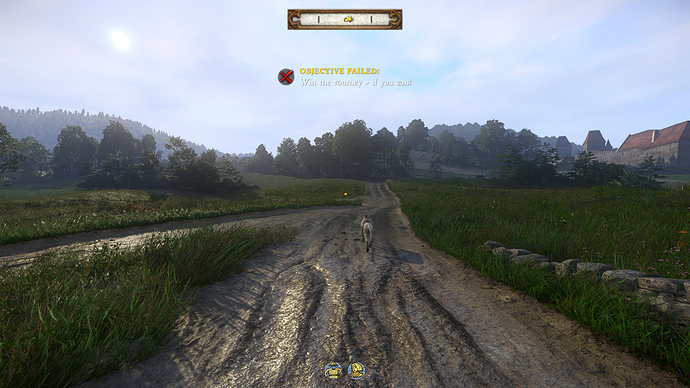 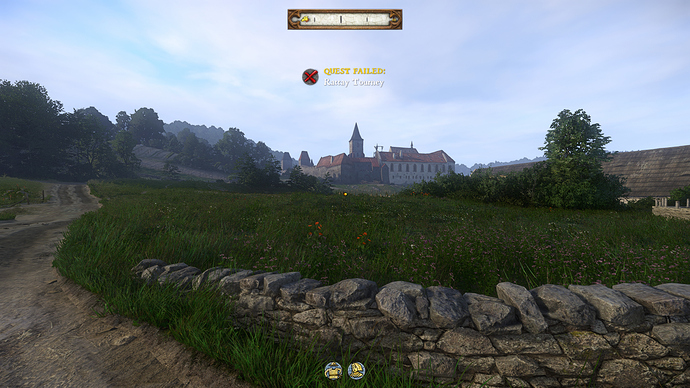 Why this is a bug:

There was no “Rattay Tourney” activity auto-launch in 1.8.2 during the main part of the game, as I see so far.

Also, as a player you may not be interested in taking part in the Rattay Tourney at the moment. For instance, unless you feel you leveled up warfare skills enough. Not every player would like to see notifications about starting and ending the tourney every in-game week, during the whole walkthrough, unless tourney was explicitly launched by himself.

Make sure “Rattay Tourney” activity auto-launch during the main part of the game (before reaching “Epilogue”) was really added to 1.9.0 on purpose.

Maybe you should make “Rattay Tourney” (if this activity was launched already) to be permanently presented in activity log without “opening”, and then “closing”, and then “reopening” it over and over again?

It can contain all the objectives about the tourney, such as “Tourney will take place tomorrow…”, “Tourney takes place today…” and so on, as it does already. But it can also contain a sort of background objective like: “Wait till next tourney…”.

Or even better: “Next Rattay Tourney will take place in N days.”, which tells the player the exact number of days to wait and any other status information, for instance: “Rattay Tourney is on hold due to Sir Hanush is currently at war”. Of course ideally is to update “N” number in that objective without displaying player new notifications every in-game morning.

That would make players always informed about the tourney, and on the other hand it would not make them annoyed by it, in my opinion.

And it also will prevent KCD newcomers from the “quest failed”-frustration.

https://yadi.sk/d/KEMPNm98vgsiXg - savefile made in 1.8.2 version; current main quest is “All That Glisters”.

I’ve started a new game in 1.9 and the Tournament marker was on map immediately after waking up in Rattay Mill. Also the activity itself appeared in the quest log the second day after talking with a innkeeper in the inn located outside Rattay upper gate (who actually told me about a different quest - that one where the hunter in Rattay needs to catch his three birds or what - not about the Tournament!). The Tournament itself started the second day. I went to the guy in the upper castle and there I was able to attend the Tournament, without any proper introduction. Not sure if bug or feature (it makes sense that the Tournament is just something that happens in the game world and Henry is just a peasant who walks around and knows nothing about it, so it can be a feature, right?). However, at the moment, my fighting skills are about 1-4 (after slight training with Bernard), I am hardly able to handle the poorest bandits, so attending the Tournament is a pure suicide, so opening the activity so soon (and giving the “quest failed” notification when not attending it) might be misleading and frustrating for newbies.

That make sense, although i did not know that. Starting “Rattay Tourney” after talking to innkeeper (and/or other givers of this quest) looks legit to me, more or less.

On the other hand the bug I reported above is the situation when before reaching the Epilogue the “Rattay Tourney” activity starts on its own, or by itself, or whatever you call situation like this. E.g. without talking to any NPC.

But as I said, the innkeeper told me about a different quest, not about the tourney, so something is broken anyway… and the quest icon and possibility to talk with the guy in the upper castle who runs the tourney about attending it was there even before I talked with the innkeeper, so I feel it was possoble to attend the tourney from the very beginning of the game (after prologue).

“innkeeper told me about a different quest, not about the tourney”

Oh, did not get that at first. Yeah, that is some weird behavior, indeed.

I’m still having this bug after a clean reinstall and no mods. The rattay tournament will auto start the very next day after talking with Radzig in Pirkstein.

Anyone else having this bug? Is this going to screw the black peter questline later on if I fail the tournament that early?

It is suppose to happen. It won’t screw with the Black Peter questline, he will still be there until you defeat him.

Glad to know it is WAD. It is not clear with those failed quest notification. As if they were expecting Henry to win outright without any training.

Still happening, I am playing the PS4 version on PS5. It is really confusing the way it works now. The quest text also implies I already signed up, when in fact I did not.