@BlickMang
Understand. the risk of breaking would seem to vary by the nature of the support and DLC (eg adding new assets to existing folders vs changing existing assets and folder structures)

fwiw, FO4’s creation kit was available before the Far Harbor (and other) DLC.

Was more insinuating since there’s no line it’s a goal instead of a plan. Assumption being (per good project mgmt practice) a plan would have a date even if tentative

so that means if there is a film icon im not allowed to be looking forward to it?

Just clarification that Combat Academy appears not to be playable content. Please by all means feel free to look forward to the Combat Academy film (vids)

@DrFusselpulli
Can you already say something about the intended chronological order of the story DLC plots and the main plot?
Are the story DLCs meant to be experienced during or after the main plot? Or are the plots independent?

Nice roadmap there. And what about Act II(or is it III) to complete the story of Henry? TBH I’m more interested in this than DLCs.

Woo! I’m very excited by all of this, content galore!! I love that this game is still being supported. I’m not sure what any of these dlc’s entail just yet but i’m sure we’re in for some great gameplay!!

Will all DLC´s be Free for Backers ?

“The Amorous Adventures of Bold Sir Hans Capon” has to be the best title I’ve seen for a game or addon… love it!

I take it Luke Dale will once again voice Sir Hans?

Rebuilding prybislavitz and the bandit one are looking awesome.

Everything promised during kickstarter will be free for backers.

A Woman’s Lot will be free along with everything below the timelime!
(Source from Rick on Reddit)

Tournament will be in rattay looking at the picture. 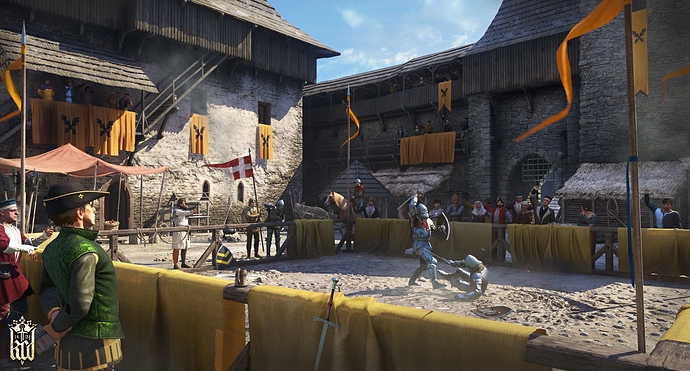 Will it be possible to play the dlc with the developped character from the main game, or does it require to start a new game for each DLC?

Awesome sauce! Really looking forward to Hardcore mode. I’ll be buying them all.

Lets hope we can fight some asshole knights

Thanks for the info!

I’d rather get the free-for-backers DLC in first place, mind you.

If band of bastards enables various factional, challenging and repeating (respawning) group battles, I’ll be over the moon. If it’s hunting down the bastards, that’d be cool too (but not as cool)

Your efforts so far have piqued my interest. Much looking forward to mod support to see your mod. If WH does right by the DLC and mod support, might pay a shit ton of money for PC setup just to play your mod(s)