How many hours you played?

I knew you had to be the same Broadway! Hi Matt.

My gameplay habits are like yours, just about half as much time because of the toddler.

What other name do I know you by? Archiver? Scadian? Writer? Armourer?

To the original post, I think my overall in-game time is somewhere around 172 hours. That works out to about 2 or 3 hours a night, and a few binge Saturdays.

Crazy! Yeah, if you had used your shield as your image I would have recognized the name. 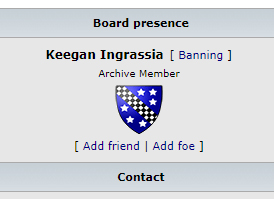 Good to see you out and about. Look me up on facebook if you’re there.

Stram has funally clocked up ‘sixteen’ as a number for KCD.

To be fair I only play KCD offline (and it doesnt count that time as a steam disincentive to keep gamers ‘always online’ intheir ecosystem…) - after two months it was 4 minutes. Became 9 minutes for last week or so…

Of course skyrim is many thousand of hours.
KCD already has many hundreds of hours clocked up in my household.

Due to the visual and world beauty we sit around as a family and ‘play together’.- partner and I massage the other whilst we alternate play days.

My daughter caught the bug and has tried several playlines with alt playstyle characters.
We find there is equal pull to a game style ignoring mainquest (fun forrest foraging) or playing the ‘game’.

Ive personally spent seven times more playtime ignoring mainquest… but then I watched rpgs evolve in the nineties (from the ‘release perfection’ that was amiga/st of the eighties), and would never attempt an RPG mainpath on game release.

Doesnt seem a trigger for happiness.
Skyrim at least never lured me to attempt it, something that Martin motivated me towards with Oblivion (not attempting mainquest)(whether he is related to patrick steward or otherwise)…

Morrowind had a great mainquest. Might and magick X (?), pillars, divinity most of these games I never consider having to be ‘on rails’.

The more my rpgs want me to do something the less likely I am to do so.
Only exception on recent times has been Persona games. There is enough lateral movement in them to feel like a playthrough will never be the same… (dungeons being identical).

Games with procedural generated land or random dungeons dont cut it longterm for ‘good story’-
So I stick to ziggurar and rogue legacy for frivolity, KCD for immersive medieval world, and if I didnt dislike riveria so much I’d endure Gearlt as my story game. (I grew up on books and insta bought Witcher 1 (before rerelease made it playable))

KCD hits all the right buttons for my go to medieval walking simulator.
Unlike putting my five year old into Skyrim (and her subsequently being attacked by wolves), her handing controller to her three year old brother, and saying ‘dont walk that way’; he then proceeds up an embankment into a sabre tooth fight.

If KCD rotated the screen when left alone I am sure Henry would have died from starvation (many times) due to my medieval ‘screen saver’.

Hundreds and hundreds of hours split between a household. (No issues other than some questline objectives being obtuse)

Best use of my PC. Just when I thought nothing was challenging PCs anymore due to how underpowered present (mainstream) consoles are…

Love me some godrays

Iv’e not yet beat the game either

Although I am on my third play-through, I am playing Total War in my off time. Will wait for a couple more patches before I play the game. This way I can get the most out of the game, when I do finish the main story line.

One play through at near 160 hours to complete. I loved almost every minute! Not the perfect game, but perfect for this time of my life.

18 months after purchase and i still have to try DLC for first time i have 180+ hours, for me KCD is like good wine you need to enjoy it not play all through few days

according to steam only 250 hours. i thought i’d be more than that