How many hours you played?

Can you beat this KCD addicts? 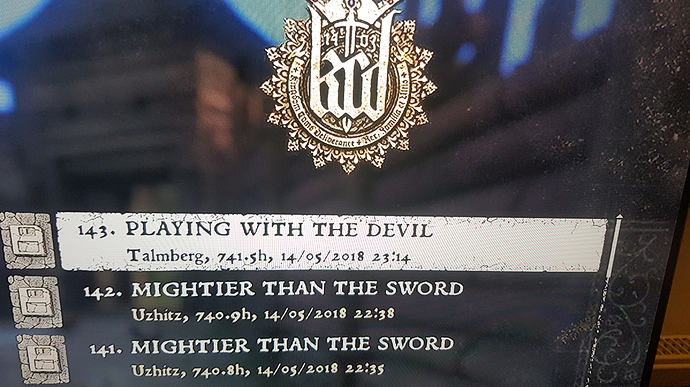 nope. at ~500h. how many groschen and enemies killed?

70 hours but i cant put any more in since my game is broken. Jesus Christ be praised 740 hours

Some people have plenty of free time. Some have real life jobs and family obligations…
Its ~90 days from release…that person must play in average 8h/day

I think i am running up to 450hrs now.
4 playthroughs.
1 time finished mainquest.
On my 4th now on ps4 game is running smooth.
Still having an awesome time.

around 50h then I got bored of it, I wish they add housing system or the ability to rebuild Sakalitz or maybe a guild system like in Skyrim like add thief’s guild and a couple of other types of groups you can join so there is more playtime.

am gonna play it all of it over again if they release new contents and DLCs.

Its not fn Skyrim.

KCD is a great game I wish it had more contents, I just can’t play it more than 50h, I spend thousands of hour in Skyrim but I just cant for this game. this game is much better than Skyrim but in terms of contents its much poorer I try to play it more I simply cant.

As allredy mentioned. It is NOT Skyrim. No dungeons (&dragons). And no ironclad bikini amazon women warriors with Double Dees

Main storyline and most,but not all,side quests took me ~130h of gameplay. In my 2nd playtime I’m still finding new sidequests I missed in first playtime.

And no ironclad bikini amazon women warriors with Double Dees

Oh Boi…wait when the modding community kicks in

Some of us have a real life, jobs, family obligations, and plenty of free time.

n terms of contents its much poorer I try to play it more I simply cant.

Generally agree but like the KCD battles more. Whenever I play KCD, i harvest the hostile NPCs and their gear at battle spawn points. Lately though, I’ve been slowing down… only at ~2.2k enemies killed and ~1.3M groschen possessed (single play through)

Really wish Vranik• and Pribyslavitz•• were converted to battle strongholds that Henry could attack with a group of guards… or the equivalent in DLC. Then, 100s more, maybe even 1000s, of hours possible for me

Just my personal opinion, and we all know what those are worth, but if someone is bored by KCD, then it probably isn’t the game for you. I spend countless hours just exploring the world. No need to rush thru side quests, just gallop off into the wild and discover “Interesting Sites”, easter eggs, random encounters, etc. So much going on in this game…

but if someone is bored by KCD, then it probably isn’t the game for you

Yes am bored but that doesn’t mean I don’t like the game it was one of the best games I have ever played and am really excited about WH new project whatever that is.

Its just that I think its missing something, i felt so empty when i finished the game.

If you have that much of a life mate you wouldn’t have 400hrs playtime.

70 hours before I couldn’t load anything. Zero desire to start over.

Whatever man. You don’t know me.

Meh… roughly 5 hours a day since I bought it. I don’t watch much tv, and I quit writing at 3pm when my wife gets off work and my daughter get home from school… I generally hang with them until around 7pm when my wife goes to sleep and my daughter does her homework. Now that I’m doing the math in my head it makes sense… i generally start playing around 8 and go to sleep around 1am… And you gotta figure the first couple weeks I got it, I played waaaaay more than 5 hours a day… I binge games when I get them… but not all the time… I think in the last 8 years I’ve played Skyrim FO3 New Vegas, FO4, and KC:D. I splurge for a couple months after I get the game and then I don’t go near the console for a long time.

In the same stretch of time since roughly valentines day, I’ve been part of a team opening up a new brewery, gone to several SCA events, swordfought at practices, made about $800 worth of armour, spent every other monday night at a local D&D and Boardgame night. I’m a geek. It doesn’t take much for me to feel like I lead a full life. Your mileage may vary.

Maybe you have higher standards for having a life… dunno… I like mine. Some guy trying to judge me on the internet doesn’t rile me up much.