I found a relative of Sir Radzig by accident

This is from the “Wiener Handschrift” of the amorial of St. Christoph auf dem Arlberg

The text tells of Niclas of Dwoygicz who donated something to the Brotherood of St. Cristoph.
And now the biggest surprise. He did in 1403.

So this Niclas of Dwoygicz ist probably a close relative to Sir Radzig.

That is very interesting. Can you read whole text? Or at least post a better quality picture? I can’t read this. 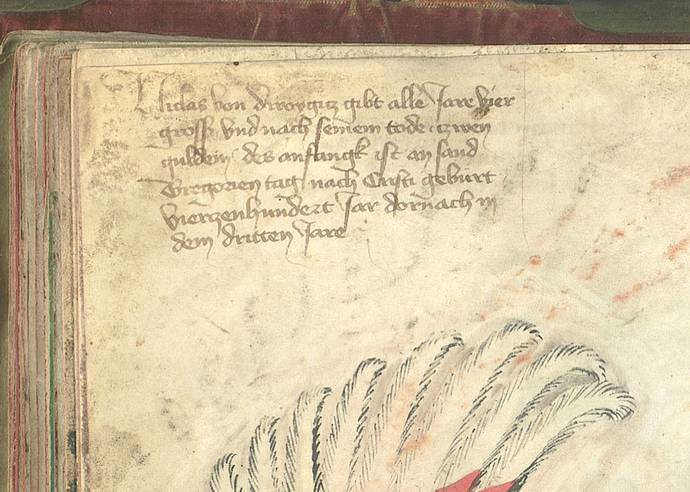 You can find it here: http://bilderserver.at/wappenbuecher/WienerHandschriftEXAv2_52z3/
Its folio 65v

This means in English
“Niclas von Dwoygicz donates 4 “Gross” every year and after his death 2 “guldein”. It will start at the day of St. Georg 1403”

Thanks, that’s interesting. So it must be some unknown relative of Radzig (brother, son?), or maybe Radzig himself.
He could have middle name, nobility had a lot of names and he maybe didn’t want to use his unusual czech name “Racek” in foreign lands.

And one more thing, after his death there were two knights of name Mikulaš (czech form of Niclas) as wardens of his estate and guardians of his under age kids. But that was long after 1403, so I don’t think it could be one of them.

I don’t think it’s Radzig himself. Because of the missing of Kobyla. This names where used as a sort of “nicknames” to know one person out of the family. (Like by Jan Sokol of Lamberg or Hynek I. Suchý Čert of Kunstadt) Because they used the same first name over generations.
Radzig had a relative high position at the court of Wenceslaus if you see his origin out of the lower nobility. So I think he would use his “nickname” Kobyla when he would donate for a organisation.

And one more thing, after his death there were two knights of name Mikulaš (czech form of Niclas) as wardens of his estate and guardians of his under age kids. But that was long after 1403, so I don’t think it could be one of them.

This idea is not so bad.
The problem is, we dont know how old Radzig exactly was at his dead 1416. Most I read is, that he was born around 1350.
Lets say he would be between 40 and 50 in 1403. Then it could be that this Niclas ist an younger brother (born between 1360 and 1370) who become after his death the guardian of Radzig kids.

Maybe this could also be the father of Radzig, who wants to secure his salvation in the last years of his live. He would have to be between 70 and 80 years in 1403. It’s possible he was still alive at this time

I agree about nicknames. Everything you said could be possibly true. But problem is, these knights are mentioned simply as Mikulaš Šraněk and Mikulaš of Reblice, they don’t have Radzigs title (“of Dvojice”, or “of Dvorec”) even after his death, so how they could have the title in 1403?

And also if one of them would be Radzigs brother, I think it would be somewhere mentioned and also his title should be the same as Radzigs, but they don’t have any, or different title.

So the fact it’s Radzigs old father is more possible for me. Or his brother, who is unknown in history and could die sooner than Radzig.