It’s no secret combat in Kingdom Come: Deliverance was “contentious” and most view it as a mixed bag. Some people love it, many refused to even put up with it, but in the spirit of the intent behind it’s grimdark “I like the way this sucks” nature can game feel be preserved while still being improved? I think yes. With ~3 years since release the mod community has done a lot to respond to many perceived needs concerning the combat progression playloop and other aspects of the game.

So fellow necromancers, as a game retrospective what mods do you feel should be downloaded in 2021 to get the best experience out of Kingdom Come Deliverance? What problems do you think haven’t been addressed by mods? What mod changes do you hope Warhorse applies to future games? (or retroactively into KCD officially)

After 400 hours of KCD, the core problems I felt needed to be addressed

To point 1 and 2, armor in the early and middle game has always felt useless. There is no progression feel from acquiring new equipment because of the stock balance.

Most swords are putting 10-30+ points of health damage through plate armor. it’s ridiculous.
You go from blocking all slash damage from 0 swords naked to… 0 swords with armor… to… 4 swords with player only endgame armor.

What this does is make most people “good” at the game go right to endgame gear through cheesing systems like gambling, theft, alchemy, archery competitions, etc. Nothing else is worth the money and it won’t protect you enough to use even if you had it. And now that you’ve spent the xx000 on a full set of armor and enter the open world you… aren’t going to use ANY gear you find on bandits. There simply isn’t a vanilla loot progression.

To point 4, the stock balance of KCD is almost the reverse. Stats are all that matter so grind them. Second most important is Q+leftclick to masterstrike everything to death. Utterly inconsequential is gear as you’ll likely die in a 1 v 2 regardless. “Fight earnestly” like Talhoffer said? NOPE! Bandits with woodcutters axes and no shoes can masterstrike you to death so don’t dare try to get momentum in your favor, just press Q.

Point 5, you’ll play the whole game as a horse archer if you enjoy Henry being alive. Only viable playstyle because armor doesn’t work. And/or do the highly immersive and very historically accurate thing of chugging Alchemical potions and poisoning all your weapons like bohemian skyrim. There is no way to play the game as a man at arms viably and even if you “git gud” it ruins the historical sim to circle kite the AI of 7 cumans as you masterstrike the lead one to a slow death, then repeat.

A rather grim picture right?
And in 2021 I’m happy to say all of it is fixed by mods. The real transitional armour is way better in terms of defence, including brigandines, plates, chain mails and even gambesons.This mod will manage to enhance the defensive abilities of most type 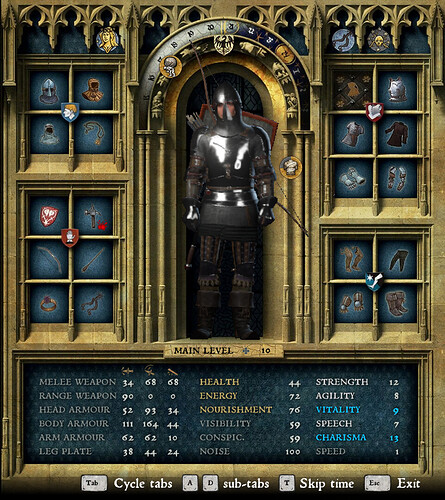 ^ The weapon and armor value rebalance simply fixes the game. Probably the biggest single change out of what I consider necessary mods. Every piece of gear matters. Your weapon choice matters. You no longer can sit back and Q+left until enemies die when they are in armor. Armor simply works now and it makes the game play unrecognizably better. Every bit of damage you take is your own fault from not managing your stamina. Swords can only cut down light enemies. Maces and axes with their limited range is not a handicap when your armor past the midgame fully protects Henry from thrusts and cuts.

There is finally an early-midgame equipment progression loop that turns you from squishy stock henry into a moderately effective fighter, then someone capable of solo’ing low level bandit camps long before acquiring a full kit of plate. Adds an NPC follower that will follow you around.

The main lesson the game teaches you is numbers win and you’re a massive idiot for trying to attack with 1:5+ odds in most skirmishes and deserve to die… then gives you no way to avoid it. You can’t wait until night and poison the food of a suprise road ambush. 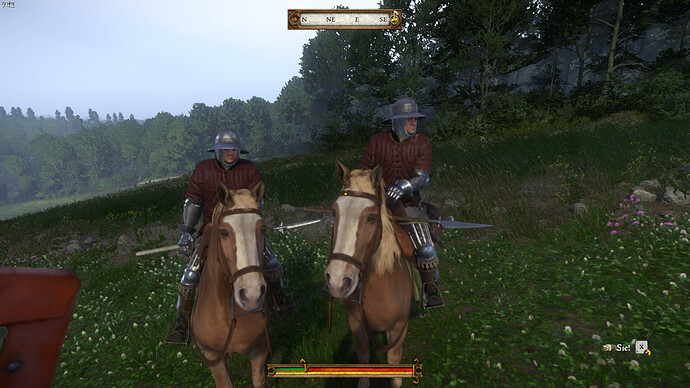 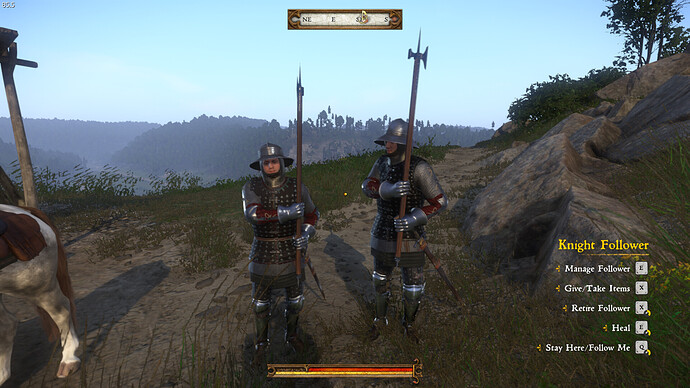 screenshot00211920×1080 512 KB
^ The game becomes far, far more enjoyable with men to command. There is now a point to the “game feel” lessons being taught. And all the frameworks were there for this system. The mod is just an NPC tethered companion spawner, but it’s on Warhorse this isn’t a voiced and quest based side system in it’s own right. They might not have the bells and whistles of bethesda conversation menus but you can equip them how you see fit and spawn as many allies as your wallet and computer can handle. You can hire them, they ride their own horses, they can wield polearms, they equip whatever armor and weapons you assign them, and their AI keeps them near you and fighting the enemy effectively. The ingame change is ground shaking. No more tedious, annoying, unbalanced fights that force you into a cheese build. You can just bring more men like the main quest teaches you is the answer. 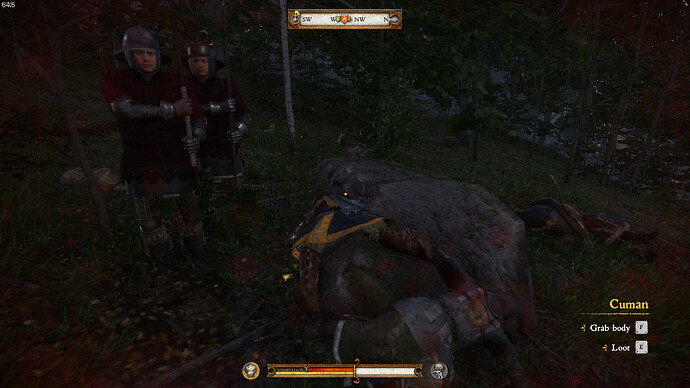 7 cumans and 3 dogs. A proper, hard fight 3v1 that was winnable as an infantry engagement (improved in no small part due to synergy with other mods here.) Most fun I’ve had in KCD and proof the game can play as a proper medieval group combat sim.

The last polearm mod you will ever need! Buyable, equipable, storable polearms with no negitive effects on NPC usage. Updated for KCD 1.9.3 This is the most comprehensive polearm overhaul available right now for KCD. Enables perfect block and feint for polearms, as well as adds combos for polearms. You can also feint other polearm users n

Polearms make the game far more interesting, especially at the early levels. It’s still a bit of a cludge, but not by much. Something like holding 1 switching to weapon1 and equipping a shield would be the only improvement. Really wish warhorse had figured this out for the base game as it massively improves game feel and realism. Especially with the other mods showcased here, it shows why polearms are primary weapons and everything else wasn’t. They cut down light infantry and keep heavy infantry at bay properly. Absolutely a necessary facet of combat before acquiring full plate with the game playing the way combat feels. This stops the reticle/dot at the centre of your screen from disappearing when using a bow. An update of archery variables 'rpg_param,xml' for 1.9

Archery overhauls and cursor. The solution from warhorse that archery was OP… not the best. Making it unusable was not the solution to arrows one shotting fully armed men due to low torso pierce defense. These mods actually would make the archery system even more broken and OP than stock, but in the context of “More historically accurate item stats” it leads to a very good balance. Archery is better, but full plate mostly negates archery. Lightly armored troops in padding and maille with open faced helmets are arrow bait. A full man at arms is almost unkillable with arrows. Synergy with other mods, you can make a companion your archer or make them your “tank” as you plink away behind him. And like a historically accurate archer double as proper light infantry and harass a man at arms 1 v 3 to kill him as part of a group since your arrows can’t. Loosens up the targeting system and makes it easier to move around in a fight and engage multiple opponents at once.

Makes it easier to switch between enemies and makes combat tethering less tedious. Accents the other changes very well. This mod makes enemies less aggressive by reducing how often they dodge, parry, attack, and how often they attack in groups.Comes in 4 versions, 0%, 25%, 50%, and 75% easier than vanilla. All of

As idiosyncratic as it is, the combination of these two mods massively improves the feel and flow of combat. They pair excellently with the armor/weapon system revamp. “Dumber enemies” may overwrite most of the changes to AI aggressiveness of “combat overhaul” but the two mods work well together regardless.

End result is blocking, striking, thrusting, and taking hits costs more stamina in a system where stamina is your buffer against health damage. You now take damage from getting hit or throwing too many hits. It’s now because of mechanics instead of unavoidable damage from effectively every weapon in game penetrating all armor.

Perfect block is both easier to regularly achieve but more time sensitive to trigger.

Meanwhile enemies can’t throw masterstrikes at all, an absolute necessity of the shared “damage is a result of running out of stamina” system of the proper armor-weapon mechanics. Now you can actually do combo’s and have combo’s executed against you by the AI. Fights are about momentum and being the one on the attack instead of pressing Q.

Working together these mods breathed new life into a new playthrough of Henry for me. 25 hours so far and still going strong. if I was picking up the game today, it’s the way I’d expect it to play. And the mods prove it could, most of these are just rebalances or proper implementation of existing mechanics just not quite there in the base game.