Forum Necromancy at this point, but Warhorse these changes to armor function versus weapon damage reinvent the game in a way I’m sure you intended. Took far too long for someone to manage it and sadly only a few hundred have gotten to experience the game with true to life armored combat mechanics so far. Probably the most necessary addon on the Nexus for those of us cranking up the game after a long time away from Skalitz.

The real transitional armour is way better in terms of defence, including brigandines, plates, chain mails and even gambesons.This mod will manage to enhance the defensive abilities of most type

For reference, endgame armor (zoul and lords of leipa mixed) values versus the Magdeburg sword in the rebalance. Pretty much perfect. 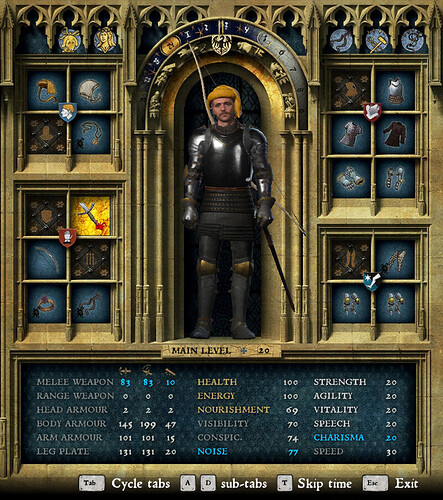 Stamina damage/expenditure finally stops feeling cheap and tedious when it becomes the true health mechanic once you kit up. There is an actual midgame gear progression where formerly meaningless differences in armor rating now start making your head, torso, limbs, mostly invulnerable against common weapons until the endgame you fear nothing but polehammers. There is actual lategame viability to lighter armor and forgoing armor for “good enough” protection of just a jack, jackchains, brigandine, maille without breastplate, padding only, etc. You have options other than full plate while picking flowers to survive the open world.

Like holy hell, the system is finally good. it actually feels like a logical consequence to get surrounded, exhaust/lose all your stamina, then take damage from being overexerted and overpowered. Brings a tear to your eye. As does a 1 v 5 fight against barely armed bandits being one sided… in your favor.

In future medieval sim games or the darkhorse chance of additional content for KCD, armor/weapon balancing following the underlying logic shown here would maximize the immersion and improve gamefeel immeasurably. It really starts to approximate the feeling of fighting in full harness when you have the proper invulnerability that goes along with armor and proper consequences to not fighting in ways that maximize it.