Oh, you are right, my friend, well… except the fact you can put on any other hood in the game either over the heavy armor, or the light armor, or even over some basic casual garments without experiencing any glitches

Other hoods are meant to be used for the same thing you use a waffenrock: identification. The noble hood is a fashion accessory to flaunt one’s status.

There’s a reason you don’t wear an expensive outer garment over armor: it’d get ripped to shreds in your first skirmish.

Judging by some posts above, I’m not the only one who is not entirely happy the way in looks after it was changed in the latest patch.

And since any other hood in the game currently does not have any clipping issues on the one hand and doesn’t look like a “Marilyn Monroe’s dress” on the over (unlike noble hood now - it really look that way) it is possible to revert the what was changed about its shape and make not clipping through the armor - both at the same time.

here’s a reason you don’t wear an expensive outer garment over armor: it’d get ripped to shreds in your first skirmish.

True. You get the point.

But the problem is the way noble hoods look without any armor underneath them in the latest patch.

And, yeah, thanks for telling some historical context (waffenrocks, identification and so on) - it might be useful, but in a separate topic, because this one is for discussing a glitch of a particular item. Not the circumstances someone should wear it on not.

Other hoods are supposed to be made from linen, while the noble hood is made from velvet, hence they behave differently.

Nobody in their right mind would wear a velvet mantle over a plate cuirass and pauldrons.

There’s a reason you don’t wear an expensive outer garment over armor: it’d get ripped to shreds in your first skirmish.

Other hoods are supposed to be made from linen, while the noble hood is made from velvet, hence they behave differently. Nobody in their right mind would wear a velvet mantle over a plate cuirass and pauldrons.

Nevertheless, some of most fancy looking NCPs in the game act… surprise-surprise… exactly the way you described: 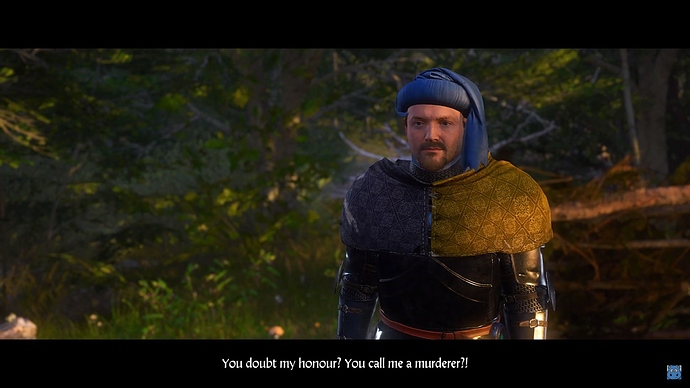 Sir Anselm of Domky (from “The Amorous Adventures” DLC) send his regards!

Left any reasonable arguments why player should not do the same thing in a role playing game, if he’d like to?

Left any reasonable arguments why player should not do the same thing in a role playing game , if he’d like to?

You can do whatever you like for all I care. I was trying to explain to you why the authors made this specific hood sit well on gambesons and cotehardies and not plate armor.

You can really wear your underpants over your trousers for all I care.

Your words do have the point!

But in fact, currently in the game, nobel hood does not sit well on gambesons and usual clothes and sits perfectly on plate armor.

You get it? It is currently does quite opposite thing in the game to what you just stated. Just closely check the screenshots above, or check it out in the game yourself, or read the first post of this topic.

Hope you will finally get what we are all on about here before posting a bunch of off-topic replies.

You can really wear your underpants over your trousers for all I care.

@stridingshadow @AfLIcTeD
The issue is that the hood is very unnatural looking even on regular clothes now. You can see this in the screenshots posted above. It is stiff and the ends float in the air instead of draping on the shoulders like they should. This issue was not present before the current version. Before it looked very natural and realistic, fitting almost like the various chequered hoods in the game. Look at the picture of Andrew posted by @vetray. That is not how the hoods should look, nor was that how it previously looked. I’m not arguing about how we should wear our clothes. I’m bringing up the fact that after this recent patch the hoods were changed to look odd and unnatural in, what I assume, was an attempt to fix the clipping issues when wearing them with armor. Please, put the noble hood on your own Henry’s and talk to some people. You’ll see that it does not look natural. I am just trying to let Warhorse know about this issue so they can attempt to fix it. I don’t intend to bring any hostility or bickering to the thread.

Yeah. Totally agree to what @TurnipBandit just said about the subject at hand.

I just don’t understand whats to fix? There’s no bug, it’s not breaking the game. All this is, is personal opinions. So WH should change the look of something for EVERYBODY just because a few people don’t like the way it looks? If it bothers you that much just don’t wear it, there are plenty of other hoods in the game.
Or you could learn how to mod, create your own and make it look exactly how you want and that won’t effect anyone else then.

You just don’t get the point of conversation, or what?

Here are the facts:

See, devs changed noble hoods in 1.9.0 to finally solve the clipping issue with armor, however the noble hoods look different now if there is not armor underneath them (compering to the way they looked in 1.8.2 and earlier) - and that is is the point of conversation.

So, no one here is actually asking for some sort of change, as you are trying to say. We are asking to revert the change instead. See?

Revert it the right way, of course: make noble hood finally looking nice and cool both when you wear them over armor (as it looks in 1.9.0) and when you wear it over some usual clothes (as it looked 1.8.2 and earlier).

And by the way if, you, perhaps, don’t have a good taste on the subject of clothing to really see why noble hoods is currently looking unnatural and odd over usual clothes (in the latest patch), you most likely will not even notice if they reverted the changes they made or not. If they revert them the right way, of course.

So there is absolutely no problem in it for persons like you, I suppose.

You are right I didn’t notice and I don’t really care that much about it, but like you others might and they might want it kept this way.
Why create more unnecessary work for them? When you can easily do it yourself. They obviously changed it for a reason and trying to revert it back could be more bothersome than it’s worth. You want them to revert it back while also keeping it from clipping, you think it is that easy to do?

So WH should change the look of something for EVERYBODY just because a few people don’t like the way it looks?

I think it’s pretty clear looking at the pictures that @vetray posted that how the noble hoods now look is not what Warhorse intended it to be. It is not just a matter of personal taste. It is the fact that there is clearly something wrong with the noble hoods appearance after the most recent patch. As someone who enjoys using the noble hood, I would like Warhorse to try to resolve this issue. It is also somewhat immersion breaking to see townsman in game wearing this hood which is so unnatural looking.

Why create more unnecessary work for them? When you can easily do it yourself.

Well, I for one am on PS4. I don’t have access to mods, nor can I change the files in my game as far as I know. And this is an issue that Warhorse created in their game. This isn’t an issue caused by mod conflicts or user error. Don’t you think if something in their game is not working as intended, they should be the one to fix it? Especially since they haven’t even officially released modding tools? I really do love this game, but it is somewhat frustrating when every patch fixes some bugs but creates even more. Not to mention things like the Pribyslavitz trader bug which has been around through numerous patches and is still not resolved.

Either way, they want us to report bugs so I’m reporting bugs. Its up to them whether they care to fix the bug or not.

Funny how no one else seems to have this “bug”.

Look man, if you’re just going to be snarky and combative can you please take it to another thread please? @vetray already said they were experiencing the same thing and even posted photographs showing what I was talking about. If you can’t see it and/or don’t care then that’s fine but you’ve said your piece.

Dudes, no matter how much comments we will post here it’s up to developers to decide to fix it now somehow or leave it as is. And they are already informed, by the way.

I apologize. I did not mean to get heated. Thank you for informing me about the developers being aware of the issue, as well as your help with the thread.

Yeah. Send them link to this topic about a week ago (since I added addition info and screenshots) to support@kingdomcomerpg.com. It’s their turn now. 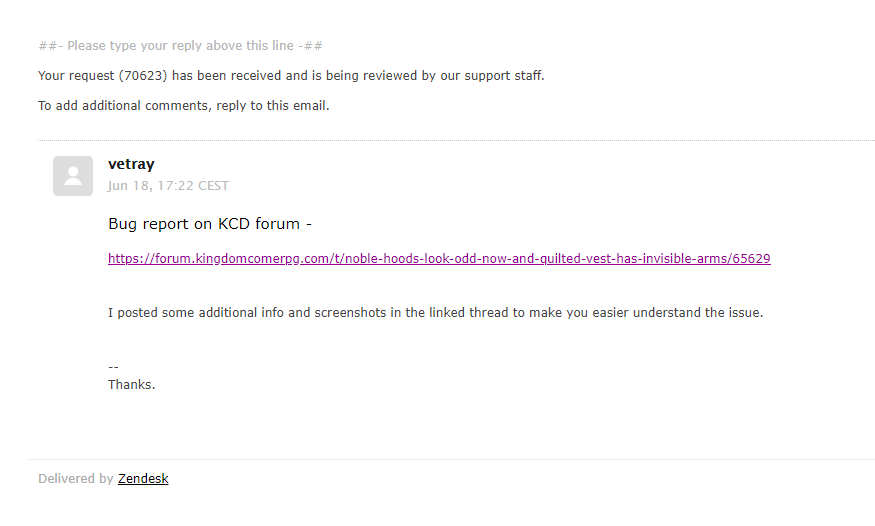 Take a look how different noble hood’s shape is (without any palate armor underneath it) in patch 1.8.2 versus patch 1.9.0. 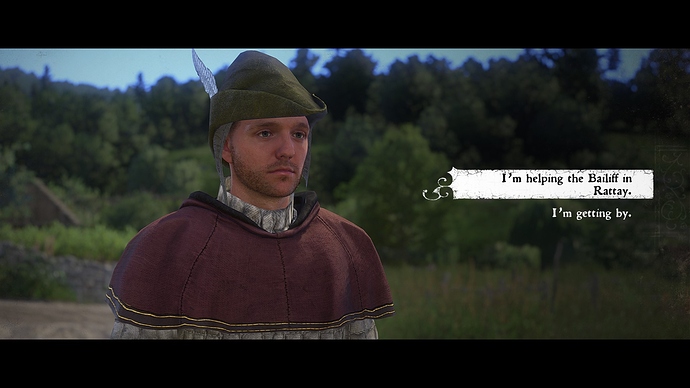 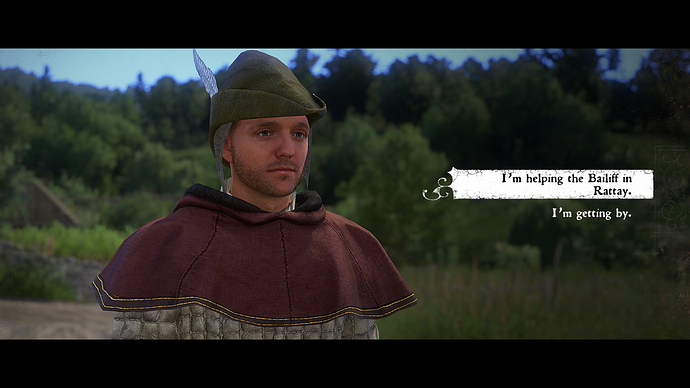