When i was running around Rattay, i checked the small church near the castle. Then i found this:

It should be an image of a kickstarter patron with name IDcrusher. However… the painting looks really similar to a public american atheist - Matt Dillahunty.

According to Matt, he does not remember to support KCD on Kickstarter, so … IDcrusher either looks really similarly to mr. Dillahunty, or the photo was not of him :).

If true, that is hilarious! Great find. Gives me a reason to revisit the churches. 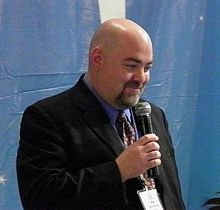 I love Matt Dillahunty, he’s a smart guy. It’s so funny how similar they look, although it is just a painting. But, still haha

Didnt they say that any of the game characters don’t hold resemble any in real life tho.

Well this is clearly not a “ingame character”.

I thought the same. I know Dillahunty and other Atheist Experience presenters used to do a lot of gaming (they reference it occasionally on the show) so I thought it was a strong possibility. But I guess he is unlikely to have forgotten sending an image file of himself to be included in the game if he really was in on that level as a Kickstarter, so it’s reasonable to assume his memory isn’t playing tricks on him and what we have here is a just a coincidence. Shame though. The thought of Him being beatified is quite amusing