The making of video

So for us who payed for the tiers offering physical rewards, when will the making of video be sent? I remember seeing an email or something a while back that mentioned it’ll be out soon but that was a few months ago.

It is in DLC Roadmap , i think it should go out together with Amorous adventures of bold sir Hans Capone and Tournaments

Well, it seems you were wrong

I would say documentary will come soon™

I was watching myself in a big cinema today 😁 Making of documentary is coming. Preview screening was good. https://t.co/J7Xuh91fiY

I saw the documentary yesterday as there was a public screening in Prague.

I think fans are going to like it. A fairly big part is devoted to the absolute beginnings of the studio, then through kickstarter and the search for a publisher to release. There are tons of jokes sprinkled throughout (shoutout to mr. Bocan). The documentary doesn’t end with the release, there is also a brief part about the situation regarding patches. One thing that surprised me was how professionaly was the Kickstarter campaign prepared and executed, I used to think less effort went into that.

It touches on some of the controversies regarding KCD, but don’t expect anything groundbreaking in that regard. I found it interesting how the whole studio is about taking new approaches and then someone claims they had to do DLCs, because “that’s the way it’s always done”. However the documentary itself is pretty entertaining.

Tobi about the Making of…:
It will took a while. We are solving distribution and law things. But together with Combat academy is in production. 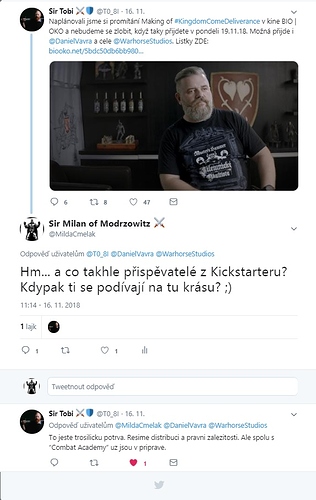 Interesting. I wonder if any content changes are yet to be made. Besides a small audio error in one part, the documentary seemed pretty finished already.