I looked also at google maps. Its exactly the path next to trosky

The reason why I’m confident with my answers is because I know what I’m talking about. This is a respone from Warhorse themselves before the Gamescom Panel this year. Also, after all 4 DLCs are released, they are still going to be working on the game in terms of bug fixes, etc. 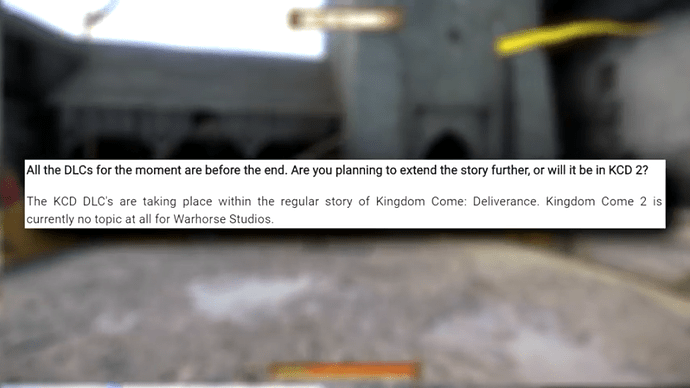 Was just a Spam Bot…

So does anyone know if there will be a kcd 2 or an expansion to the game for sure?

One issue. The things you mention aren’t on the DLC roadmap for KCD. For your narrative to hold, WH would have to be intentionally misleading or have ridiculously poor follow up communications

Here is the Roadmap for future DLCs and when to expect them: [Roadmap]

Article, video or where did you get it. Give me Link. I can also fake screenshot.

The Screen said only that they havent any idea in her brains and no nervs to think about a new title. Hint words for a expansion can be, “currently” and "at all for"
This makes the tweet very interesting!

Very well, I do not see what is so hard to comprehend. This news should excite you! I would love a major expansion for Act lll.
All of the answers were from Warhorse. Here is the link.

Its hard to comprehend because I and many others have always been told there will be a sequel. If I were persistent, Im sure I could find evidence that they do indeed plan on making sequel. I know I heard they want to release all dlc and make game stable before starting on a new game.

Well. Seems like they hold on working on KCD2.

is this a dlc aimed for the end of the game? Or somewhere in the middle

Since the quest is open around mid game, answer is middle. They are not planning to release DLC/expansion of end game story (at least not main quest line), cliffhanger stays the same.

It would be pretty awesome to have a sequel during the Hussite Wars but looks like they aren’t doing it yet. I personally think it would be amazing but I want to get some sort of expansion on the main questline.

Release date in first half of October.

I think henry will start recruiting his own army to hunt down the remaining bandits and cumens. There is concept art of cumens robbing supply wagons in force and men trying to stop them. Also there were concepts of massive open battles which never happened. it would be cool if we get a full battle on open ground with henry the commander where he can make tactical decisions that affect the outcome.

That was very helpful and clarifying, thank you.

That’s for The Amorous Adventures. I meant a huge expansion that continues from the ending cutscene.

There is not supposed to be another expansion after end scene as they mentioned few times. The end is same, they are adding DLCs in between.