I am in the early stages of research to create a mod for Kingdom Come: Deliverance based on the Hussite Wars.

During the period of 1419 to approximately 1434, the Christian Hussites and their allies fought against the Catholic Church and Sigismund, Holy Roman Emperor, after Jan Hus was burned at the stake in 1415. The Hussites, lead by Jan Žižka, far outnumbered and less equipped, triumphed in almost every battle because of their unorthodox tactics and the novel use of war wagons in combination with medieval firearms to defeat well armed and trained infantry and cavalry. This presents a very interesting opportunity to tell the unique but not well known story in a setting which fits well with Kingdom Come: Deliverance.

What will the mod include?

The Hussite Wars Mod will aim to add a new map, quest, characters, weapons and equipment. It is not intended to be a full game anywhere near that of the original game, but immerse the player into the land Bohemia during the Hussite Wars in a 5-20 hour quest which tells the story of this interesting time in history.

v0.1: The initial prototype will include a Hussite weapons and equipment pack, and the first major milestone will be to add cross bows and firearms to the game, followed by horse drawn carts and siege weapons.

v0.2: The second phase will add new characters, including Jan Žižka and leaders of the Hussites.

v0.3: The third phase will add a new map, located somewhere in Bohemia, including one or more castles, villages and a new landscape to explore.

v1.0 The final product will add a new story and quest line which will cover the lead up to and siege of a castle by the Hussites, in which the player is free to choose which side they fight for, but history will ultimately decide their fate.

Check out the KC:D Hussite Wars Mod community on Discord - hang out with 10 other members and enjoy free voice and text chat.

I don’t to break your enthusiasm but that sounds pretty crazy. Just starting with your first point:

The initial prototype will include a Hussite weapons and equipment pack, and the first major milestone will be to add cross bows and firearms to the game, followed by horse drawn carts and siege weapons

So you want to implement new models, new animations and new gameplay mechanics that require very advanced knowledge about the cryengine and modeling software. Are you even sure the mod tools are powerful enough to do all these things and how many people are you working with?

not to mention new map. Thats a lot of hard work. but, if you do it then you will be a god.

Honestly I’ve done way bigger mods and game features by myself, so scope wise it isn’t actually that big for the initial prototype which is why I broke it into phases, the first meant to determine what is and isn’t possible.

Are you even sure the mod tools are powerful enough to do all these things and how many people are you working with?

As you point out this is actually the biggest unknown right now. It is possible to create a new weapon class, but some of the logic appears to be defined in code which I can’t modify. I’ve reached out to WH Studios for help and hopefully there is a way to define new weapon class with its own logic. What I do know is that adding these weapons in vanilla CE3 isn’t a big deal, so I am sure there is a way forward.

I appreciate the words of caution though, it is always important to know the scope of a given project. I think at least I can add some new game mechanics, even if I am not able to accomplish everything I want to.

Exactly what I was thinking… Great idea but to be honest, it sounds bit crazy to me:-)
Anyway if there is anything I can help with, let me know Uriah. I live in Bohemia and might help getting some historical sources, photos, facts, etc…

But new map and story sound impossible - too much work. Scenario, scripting, map and locations design, cutscenes… together all of this together is like a new game.
For begining be better start and FINISH not so ambisiosious and huge mod. For ex. The story of Zbyshek by analogy with Theresa. At least it will show to commeunity what you really can to made that thing that you say about.

Yeah modeling is the least of my concern, except maybe new buildings, so those will be saved for last, if at all.

A new map isn’t actually that hard, as long as you keep it a reasonable size and reuse most of the assets already in the game. CE3 has some powerful tools already, and WH Studios has created tools on top of that, there are already people working on new maps.

Luckily WH has created a very powerful set of NPC and scripting tools, so I am not too concerned with quest design, what I have planned is actually fairly simple.

Cutscenes are not something I am considering, while RPG dialog can be text based at first and possibly voice acted later if there is significant community interest, while the character animations during dialog in most of the game are just generic and reused, and the KCD facial animations themselves are incredibly simple.

The most technically difficult aspect of what I am proposing is without a doubt the new weapons and related game mechanics, which are the focus. I am hoping if I can accomplish that, the community will help with some of the more time intensive tasks.

To be honest, WH has provided some of the most comprehensive modding tools I’ve ever seen, and I am excited to see what mods the community creates, so thinking big isn’t such a bad idea. 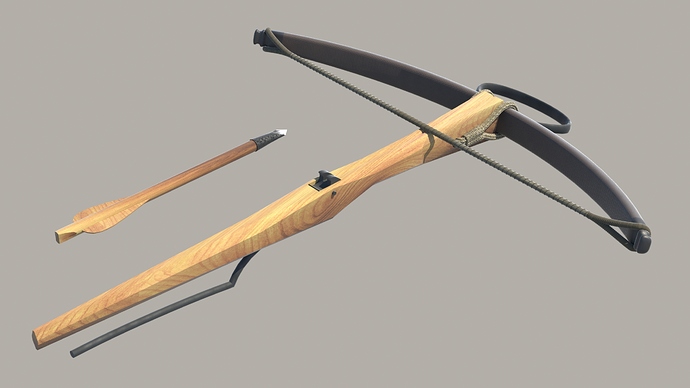 Here is the first draft of the Concept Design document detailing all of the planned features and changes for this mod. If you wish to give feedback or contribute to this project, please join our Discord server!

WH has provided some of the most comprehensive modding tools I’ve ever seen,

There are a few better ones!

CE3 has some powerful tools already, and WH Studios has created tools on top of that, there are already people working on new maps.

Maybe you can give some links or information who, where, etc.?

Of course there are better, but few and far between.

Here is an example of a quick map someone made recently.

The Seven Kingdoms team is showing good progress on new environment art for their map as well, and having used the CE terrain tools in the past it is pretty easy to make a massive map, doing the detailed level design for villages is arguably much more time intensive, but doable.

this looks promising. Have wanted crossbows for a long time, cant wait to blast civilians with them!

@nopinkcreations I can’t promise anything, there are some very real technical challenges, but I’ll try my best!

3 posts were merged into an existing topic: Can Someone Explain to me a Detailed Guide on how I can edit the House of Zoul Armour

Best wishes on your endavour. This looks really amazing. Very interested and looking forward to your mod.

I was kind of hoping we’d get to play Henry as he would be about 28 or so by that time, if he was 16. I think I see somewhere where he is about 16. Maybe 17 or 18. So, he’d be a man full grown and in prime of his life, so you’d think he’d participate. Although sadly, Radzig dies in the time frame you are talking about, I think.

@Gilmer I am assuming you are referring to the narrative story concept? I did consider something like that originally, however I don’t think Henry’s story is mine to tell, almost like Rian Johnson… err… nevermind… anyway… I believe continuing that story isn’t the right thing for a mod to do, and I would like to tell a different story, but in a similar context to the original. It is very possible to bring some of the characters from KCD into it, especially the historical ones, but I wouldn’t want to step on WH’s vision. I believe it was Hans Capon who died during the Hussite Wars, but I do believe Radzig Kobyla was killed in 1416 some time after the death of Jan Hus.