Weekly Torch - the barrel of questions

Plans for the future:
After KCD; will WH work „only“ on KC2 or have you plans for another game? Maybe work on at the same time?
For finishing KCD you planned 22 months (after Kickstarter), but now you will need more than 44.
How long will it take for part 2?(plans at Kickstarter 9 months → are 18 months more realistic?)
What are your plans for WH in general? Should WH stay at this size, or do you want become a „big player“?
The setting of KCD is fresh at the moment, but you don´t want to work the next 10 years always on the same(KC2, DLCs, prequel of KCD ect.). What are your personal goals? Work the next 30 years on videogames? Start with something different/new?
You worked the last 7 years on this project. Is it correct to say, this was the center of your life? Was there a weak moment (after kickstarter), where you said the project is shit/waste of (life)time?
How do you motivate yourself and your employee after this long time?

Will there be more animations for doing things like picking up stuff, maybe dropping from inventory items.
Also will there be anything to do in forest besides visual entertaining ?

Are you planning to include proper scabbards into the game? Was there discussion about it in the development already?
If scabbards for some reason are too complicated to implement, would it be possible to include one or two animations for characters resting their swords on their shoulders?

These seem to be the only two realistic options for carrying swords around, because you either had a scabbard to protect your sword from dirt and rust in the long-term or you carried the sword in your hands or at your shoulders when you were expecting to need it for only a few days.

And now you can also ask your favorite questions to our Sound Designer Vojta. Please write if your questions are for Dan or Vojta, as Dan didn´t answered yet because of the christmas season. Stay tuned for his answers.

Hey Vojta I hope you like this. It’s very good music from one of similar games. Please listen to it, i think people really like this one.

Hi Vojta,
There are hundreds of sounds in a forest for example. Some are very often to hear and some are very rare. How many samples did you record only for the woods. Can we expect some of those rare samples too? Like a “singing/yelling” tree in the wind.
I think it’s not that economic to put those samples in the game which comes only two or three times a day…how do you think about building a perfect digital (forest)sound environment for the game. What are the biggest compromises?
you told us about “audio dramaturgy for cutscenes”. Can you give us an example? I don’t think you mean the music…
Did you and your Colleagues at WH designed and build the best forest in a computer game??

Well, this question had to come:
How many dubbing versions are planned?

Are you planning to include proper scabbards into the game? Was there discussion about it in the development already?
If scabbards for some reason are too complicated to implement, would it be possible to include one or two animations for characters resting their swords on their shoulders?

These seem to be the only two realistic options for carrying swords around, because you either had a scabbard to protect your sword from dirt and rust in the long-term or you carried the sword in your hands or at your shoulders when you were expecting to need it for only a few days.

There was a glimpse in the latest video update but I really hope to see scabbards also for (ALL) NPCs and the PC?

I’ve been playing a lot of the board game A Feast for Odin lately as well as watching the History Channel TV show Vikings and it struck me that this would make an amazing historical setting for a sequel to Kingdom Come: Deliverance.

Dan, would you ever consider placing a sequel in the 9th century focused on playing a viking during their time of expansion? I see it as a story of a young viking seizing an opportunity to make a name for him- or herself through daring raids against Francia and Anglo-Saxon England as well as diplomacy in working together with other viking clans, and eventually ending with negotiating with the leaders of the conquered lands to establish a permanent legacy for future generations of Normans.

I love this music from Gothic III Forsaken Gods

Question for Daniel
What do you think about the criticism of objects models in the game. For example, this discussion

Write it in english and you might have a chance!

After the epic answer in english topic:

Warhorse has their own historical advisor’s so i can’t see the armor being as unrealistic as you claim it to be.

Is necessary write a lot of text for explanation and correction of mistakes in the models. Hard for me make such a large amount of text in English.
I recommend to use a browsers add-on. For example - http://translatorforfirefox.blogspot.com/

Now it is time to ask your questions to our programer Michal “Mikee” Hapala.

Have any of the questions been answered by the last two people? Did I miss their answers somewhere? And here are Vojtas answers to your community questions: Hello Pandemic. Beautiful music indeed. It’s somewhat different style when I compare it to KC:D but it sounds fantastic. Hi Urquhart. I recorded many hours of different forest...

Yeah, they’re both there now. I checked that page earlier today and didn’t see them so my browser must have been loading from local cache or something. But they’re there now so that’s cool.

Dan didn´t answered yet, because of the winter holidays, you can expect his answers in the next couple of days

Is this YOUR bug or is Henry a duck??? 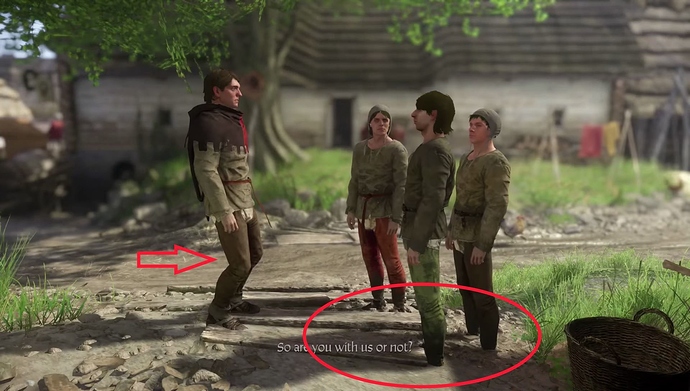 it dynamically fits the legs and feet to the shape the character is standing on.

I don´t care for the Spanish inquisition!!!
In the last 2 weeks I have “quicksaved”, more than once!

I also frequently roam the halls in a lookout for heretics claiming there are bugs in my code. Nobody expects the Spanish inquisition!