Will the Beta be available for Linux?

its going to kill the solid fan base we have.

Is there a fixed date for the release of the Linux version ? Thanks a lot.

No, there is no fixed date for any version yet.

So emails I exchanged with support back in March said: “You will get a clear information about this topic on E3.”

It’s now E3, are we getting our information soon? When will we find out whether or not there’ll be a Linux version?

E3 has come and gone, when can we expect information about the Linux release of the beta? Is the full release still going to be simultaneous across Linux, OSX, and Windows as promised?

I backed this project at the Baron level in early 2012 with the understanding that Linux was being treated as a first-class platform equal to Windows, not a secondary one to port to later. Nearly four and a half years later, having been ignored totally ignored for the Alpha and passed over for simultaneous release of the Beta, that has clearly not been the case. Frankly, while the game still looks like a lot of fun, I make a point of not supporting projects which don’t support my OS and would not have backed it at all had I known what I know now. I don’t see the point in asking for money back like some others have, but some sort of compensation for - or at least public acknowledgement of - missed targets would certainly be nice.

Yes, we wanted to have an answer on this question on E3, but unfortunately we still don´t have it.
Right now our focus is on the core game development for PC and Consoles, and we are very tight in scheduling here. Linux and Apple might unfortunately not happen on day 1 of release, but we don´t know about any details yet and we are sorry that we are not able to give a more specific answer yet.

N[quote=“DrFusselpulli, post:71, topic:22138, full:true”]
Yes, we wanted to have an answer on this question on E3, but unfortunately we still don´t have it.Right now our focus is on the core game development for PC and Consoles, and we are very tight in scheduling here. Linux and Apple might unfortunately not happen on day 1 of release, but we don´t know about any details yet and we are sorry that we are not able to give a more specific answer yet.
[/quote]

From what you say in this post, I don’t see how simultaneous release of Windows, macOS and Linux could be possible. Perhaps it’s time to admit it and not look devious and evasive.

I backed this for the macOS version, but have no hope of that ever being produced now.

While I agree that with the comments presented a simultaneous release for Winx64, PS4, XB1 looks likely, but MacOS and Linux have requirements that differ sufficiently to delay their completion… however, the statement does indicate that the plan does still include a release for these platforms once the time restriction for the first release window is relaxed.

I take that at its face value. A release, but a little delayed.

I’ve seen no evidence of a macOS or Linux release, I’ve seen evidence of the developers not being able to meet their plans, so I’m not sure why I should believe them just because they say so.

I take that at its face value. A release, but a little delayed.

Define “a little”. We’ve not seen the beta yet.

It was a month since E3, another update came without any substantial info for linux and mac backers. Is it the time to request a refund? Because I don’t really know what I’m waiting for right now. How much time do you need to finalize decision about linux and mac release and when will you be able to say for sure will or won’t it ever happen (and how long will it take)? I am complete ignoramus in PR but it sure is dishonorable move towards linux and mac minority not to address the issue publicly in kickstarter updates.

More than one year passed…can we please have some info about the linux version?
If you continue not to provide any info or if you decided not to support linux after having promised it on kickstarter, can you please at least tell us how can we get a refund?
Thank you very much.

Why did I back this?

Did you? I see no forum badge for any version.

Yes, and I am about 80% sure I signed up to the forum with the code they sent me.
But then, I registered in 2014 or so and didn’t have any real reason to come back before there was anything released for Linux at all, so I don’t really remember. 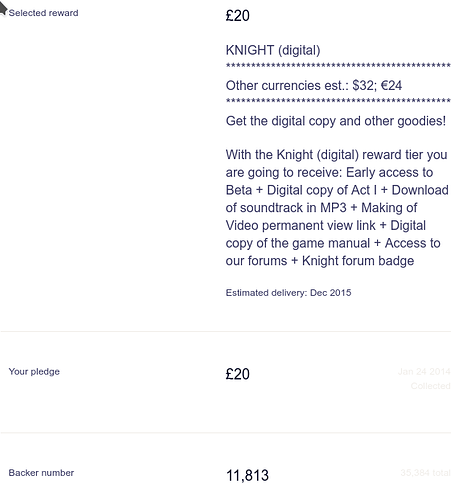 Yeah, same crap - wait a little more, probably maybe there will be linux version… one day (if we’ll be so filthy rich after other versions releases that we won’t have any other financial priorities). But don’t worry sure you’ll be able to play on windows!
To hell with it. I believe I don’t deserve this kind of treatment. I’m going for refund, and I recommend every non-windows backer to do the same. Not like you’ll be able to play the game before it’s on second or third sale anyway if ever.

I kinda understand the frustration, but isn’t it a bit early to give up all hope? KC:D is not going to be released on any platform for another 6 months at least.

My concern is that the more people request a refund now, the less incentive there is for Warhorse to deliver on their promises, as all the potential Linux (and OSX) gamers already dropped out.

Now, I don’t want to excuse or defend WH; I’d rather have a definitive “Yay” or “Nay” now than being kept in Limbo until eternity. So the ball is surely with them, and they constantly keep dropping it

One thing that has given me some headaches lately, however, was a part of the interviews here: http://wccftech.com/kingdom-come-deliverance-targeting-1080p-on-ps4-warhorse-is-already-looking-at-neoscorpio/ :

Is Kingdom Come: Deliverance running on the latest CRYENGINE V?

We have the latest version of CRYENGINE 3, which is way more advanced than CRYENGINE V. It’s a bit complicated, because we have the paid CRYENGINE version from before they released CRYENGINE V.

Maybe if we were to start again right now, we would consider using it. Now, we don’t consider it at all because 3 is a bit more advanced than the V, and it would be a big trouble to make the change.

While official Linux support has supposedly been added to Cryengine 3.8.1, I am somewhat concerned about the level of support Crytek still offers for this older engine branch. Will the Linux render path be further optimized and adapted to changes in the Linux graphics stack? Will it ever gain Vulkan support? All of those seem vital in my book to offer a quality Linux port.

It’s more about disregard of backers. Basically first there was a promise on platform support which is on of key factors for some people who invested financially and emotionally. Then they say that it isn’t technically possible, and then nothing at all for half a year.
But I don’t see why exactly should we hold on hope. All this stuff with waiting for E3 and promised announcement - it looks like damage control after careless comment. But even if isn’t and they discussed other platform support with publisher - it was obviously unsuccessful or they would say something. So what are we waiting for now? Is it release when warhorse will see how successful KCD was and decide is it financially feasible to keep up their promise?
I actually disagree on the refund thing - it’s not like they know how many backers are here for other platform support in the first place. More than that it send stronger message that something should be done on the issue. Because whining on forums for half a year get us nowhere. And after you’re becoming potential linux/macos customer who decide to buy or not their game while now you already paid and the choice to keep or not their promise is in their hands. I believed in their promise. Well, I don’t anymore.