Mods are unofficial components of a game and as such Warhorse Studios accept no responsibility for their issues caused by their implementation.

When playing with a mod, always ensure it is compatible with your version of the game. Information about the mod’s compatibility should be given in the mod’s description. If you encounter problems during gameplay, first uninstall the mod and check that you are using a savegame that was generated without mods. You can find instructions for uninstalling mods for example here.

In order to increase stability of the game when using mods, Patch 1.9 adds new functions that eliminate some of the issues caused by incompatible mods or by residual changes left after their uninstallation.

Since many of the problems occurred after updating the game and the mods were not compatible with the new version, these mods will be moved on launch of the game to the folder mods_old and the player will be informed by an on-screen notice stating that the updated versions of the mods must be installed. If, however, the player wants to relaunch the original mods, he/she must do so by manually moving them to their original location.

Another function is the deletion of game content (items, NPCs etc.) that was added by the uninstalled mod. Again, the player will be informed of this by on-screen info.

The final change is that the player is informed that a save position was generated with mods. This info appears at bottom right of screen when a specific save is selected. 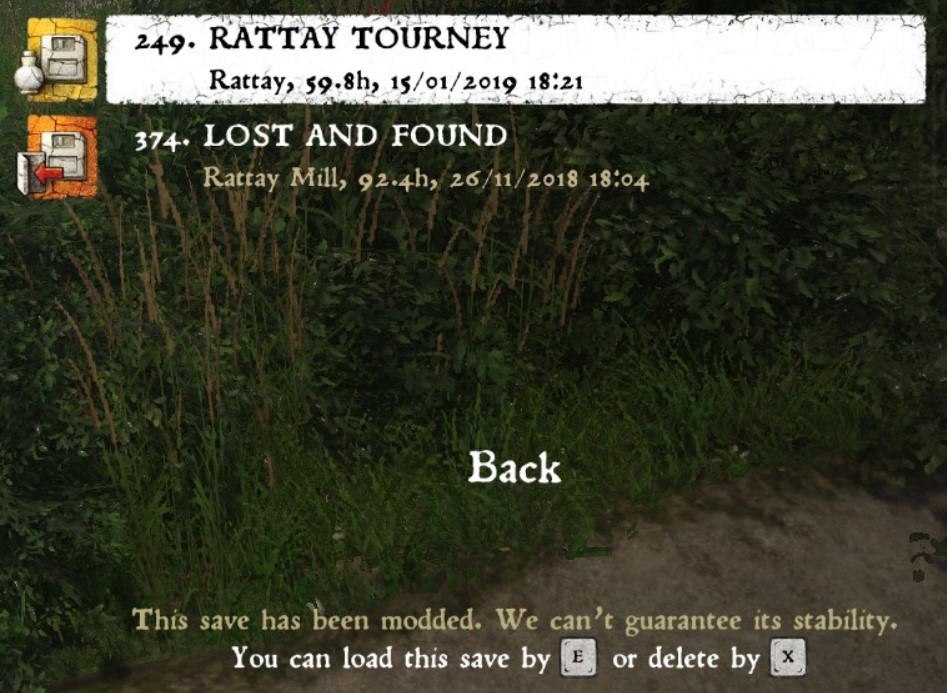 Here is a list of known issues that can occur due to implementation of incompatible mods:
• Infinite faders
• Crashes on saving, loading or during gameplay
• Armour cannot be (un)equipped
• Textures are streamed with lower mips than they should be
• Characters have badly layered geometry of bodies and clothing
• Some dialogue prompts are missing
• Under certain circumstances, perks can’t be taken
• Some texts are missing and are replaced by code strings

Some of the issues described above were also reported when using a combination of some of these mods:
• Binoculars Zoom
• Henry’s face customization
• Instant Herb Picking
• Unlimited Weight
• No Fog Of War
• No Helmet Vision
• Perkaholic
• Richer Merchants
• Roads are Dangerous
• Trough Washing Deluxe

These lists are not exhaustive – they are only a cross-section of reported bugs associated with the overall most popular mods.

Thanks for the thorough statement and explanation on modding issues.

Might want to pin this thread, so it doesn’t get lost.

Yes, good idea. It is pinned to modding

The text is great but distant from actual file (identifier). If possible, denoting by alt icon (eg M on disc or white border around icon) or appending (pseudo) label to save file (eg Rattay Tourney [M]) would be appreciated.

Hi
I am author of binoculars zoom mod which is on the list. i had no complaint about incompatibility until now.
is there a way to see what exactly was the problem and in combination with which other mods?